SAN FRANCISCO — Today, Silicon Valley’s Smart Tech Challenges Foundation announced it is funding an innovator developing user-authentication technology for firearms, as part of the first-ever $1 million Smart Tech for Firearms Challenge. The Foundation is awarding grants to a total of 15 innovators who are working to improve firearm safety by developing personalization features in firearms, locking devices, and ammunition systems.

The first innovator featured by the Foundation is 17-year-old Kai Kloepfer, a high school student from Boulder, Colorado, who is integrating a biometric sensor into a firearm that requires an authorized user’s fingerprint to discharge. View images of Kai and his technology here.

“It’s going to be my generation – the ones who have grown up with digital technology and electronic integration – that will lead the way in the development and adoption of smart gun technology,” said Kai Kloepfer. “This type of technology has previously only existed in science fiction movies. But young people are open to exploring our options as consumers and as innovators. I have real hope that we can apply biometric technology to firearms in order to reduce accidental deaths and injuries, and to prevent tragedies.” 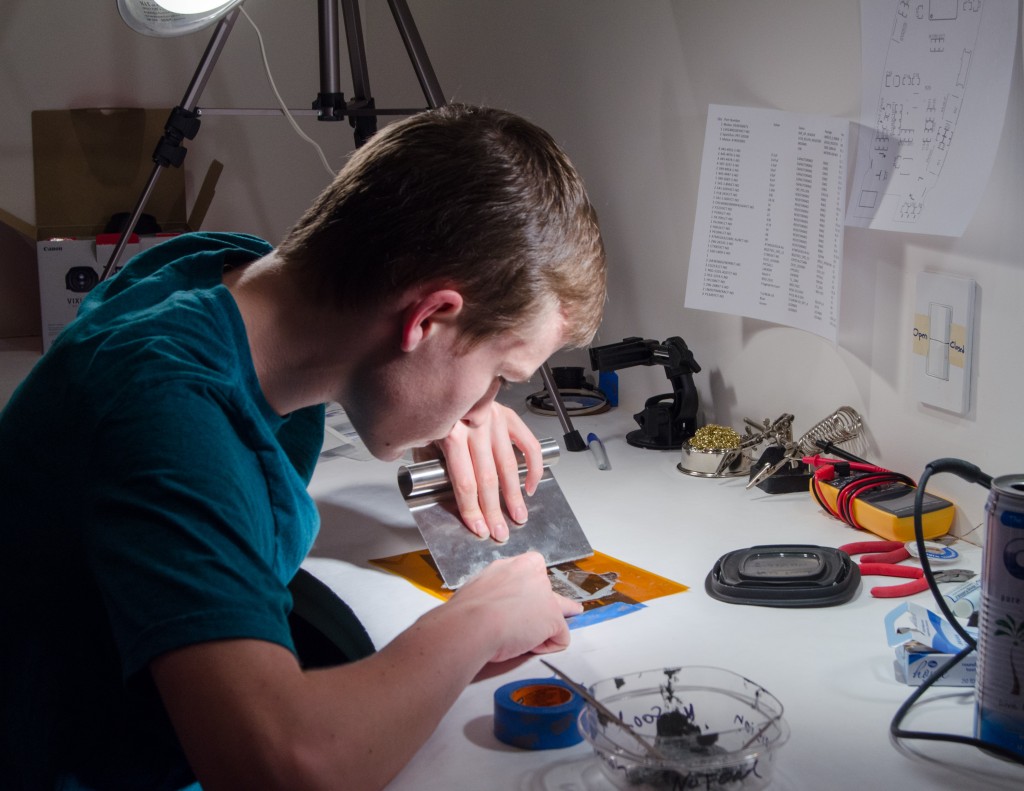 This week, as Apple Inc. doubles down on its fingerprint-access Touch ID technology, bringing its laser-cut sapphire crystal protected sensor from the previous iPhone 5S to the new iPhone 6 and iPhone 6 Plus, consumers are experiencing the continued evolution of biometrics integrated into the products they use every day. Touch ID is now capable of 360-degree readability, and allows for the enrollment of multiple fingerprints, improving user experience and paving the way for widespread adoption of similar technologies.

“We need the iPhone of guns,” said established Silicon Valley tech investor Ron Conway in an interview with the Washington Post around the launch of the Firearms Challenge. “The entrepreneur who does this right could be the Mark Zuckerberg of guns.” Conway was a founding donor to the Smart Tech Challenges Foundation, which launched last year.

Kai is receiving the $50,000 grant to apply toward the integration of a fingerprint scanner, which can be programmed for a virtually unlimited number of users, from a plastic model of a Beretta Px4 Storm onto a live firearm. The sensor that Kai is working with boasts a 99.99% accurate fingerprint recognition rate—even with partial prints. He has already used a part of his Foundation grant to purchase a professional-grade 3D printer to create new parts for his prototype.

The young engineer began working on his technology partly as a response to the tragic shooting at the Aurora, Colorado movie theater, just about an hour’s drive from his home. A previous iteration of his technology earned him a Grand Award of the 2013 Intel International Science and Engineering Fair, and was the top engineering project submitted by an American student, placing him among the top 34 innovators out of 7 million students who entered the Fair. His previous project was built on a budget of less than $3,000.

Kai Kloepfer will be speaking at TEDx Mile High: CONVERGENCE in Denver, Colorado on September 13 to discuss his innovative technological approach to firearms safety.

The Smart Tech Challenges Foundation was formed in 2013 with a mission to foster innovation in firearm safety. Through the incentive challenge model, the Foundation aims to unleash the entrepreneurial energy of America to propel safety forward. The Smart Tech for Firearms Challenge is granting at least $1 million to innovators from around the globe developing user-authentication features for firearms.

To date, $800,000 of the $1 million in grant money has been disbursed. The remaining $200,000 will go to the team or teams that exhibit the most progress throughout the course of the Challenge.

Error: An access token is required to request this resource.
Type: OAuthException
Code: 104
Please refer to our Error Message Reference.

Sign up for Smart Tech news and innovation updates: