You are here: Home / Fingerprint / Smart Guns Save Lives. So Where Are They? 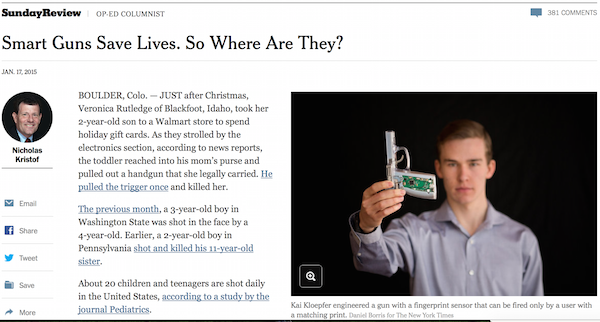 Written by Nicholas Kristof for the New York Times.

BOULDER, Colo. — JUST after Christmas, Veronica Rutledge of Blackfoot, Idaho, took her 2-year-old son to a Walmart store to spend holiday gift cards. As they strolled by the electronics section, according to news reports, the toddler reached into his mom’s purse and pulled out a handgun that she legally carried. He pulled the trigger once and killed her.

About 20 children and teenagers are shot daily in the United States, according to a study by the journal Pediatrics.

Indeed, guns kill more preschool-age children (about 80 a year) than police officers (about 50), according to the F.B.I. and the Centers for Disease Control and Prevention.

This toll is utterly unnecessary, for the technology to make childproof guns goes back more than a century. Beginning in the 1880s, Smith & Wesson (whose gun was used in the Walmart killing) actually sold childproof handguns that required a lever to be depressed as the trigger was pulled.

“No ordinary child under 8 years of age can possibly discharge it,” Smith & Wesson boasted at the time, and it sold half-a-million of these guns, but, today, it no longer offers that childproof option.

Doesn’t it seem odd that your cellphone can be set up to require a PIN or a fingerprint, but there’s no such option for a gun?

Which brings us to Kai Kloepfer, a lanky 17-year-old high school senior in Boulder, Colorado.

After the cinema shooting in nearby Aurora, Kloepfer decided that for a science fair project he would engineer a “smart gun” that could be fired only by an authorized user.
“I started with iris recognition, and that seemed a good idea until you realize that many people firing guns wear sunglasses,” Kloepfer recalls. “So I moved on to fingerprints.”

Kloepfer designed a smart handgun that fires only when a finger it recognizes is on the grip. More than 1,000 fingerprints can be authorized per gun, and Kloepfer says the sensor is 99.999 percent accurate.

A child can’t fire the gun. Neither can a thief — important here in a country in which more than 150,000 guns are stolen annually.

Kloepfer’s design won a grand prize in the Intel International Science and Engineering Fair. Then he won a $50,000 grant from the Smart Tech Challenges Foundation to refine the technology.

By the time he enters college in the fall (he applied early to Stanford and has been deferred), he hopes to be ready to license the technology to a manufacturer.

There are other approaches to smart guns. The best known, the Armatix iP1, made by a German company and available in the United States through a complicated online procedure, can be fired only if the shooter is wearing a companion wristwatch.

The National Rifle Association seems set against smart guns, apparently fearing that they might become mandatory. One problem has been an unfortunate 2002 New Jersey law stipulating that three years after smart guns are available anywhere in the United States, only smart guns can be sold in the state. The attorney general’s office there ruled recently that the Armatix smart gun would not trigger the law, but the provision has still led gun enthusiasts to bully dealers to keep smart guns off the market everywhere in the U.S.

Opponents of smart guns say that they aren’t fully reliable. Some, including Kloepfer’s, will need batteries to be recharged once a year or so. Still, if Veronica Rutledge had had one in her purse in that Idaho Walmart, her son wouldn’t have been able to shoot and kill her.

“Smart guns are going to save lives,” says Stephen Teret, a gun expert at the Johns Hopkins Bloomberg School of Public Health. “They’re not going to save all lives, but why wouldn’t we want to make guns as safe a consumer product as possible?” 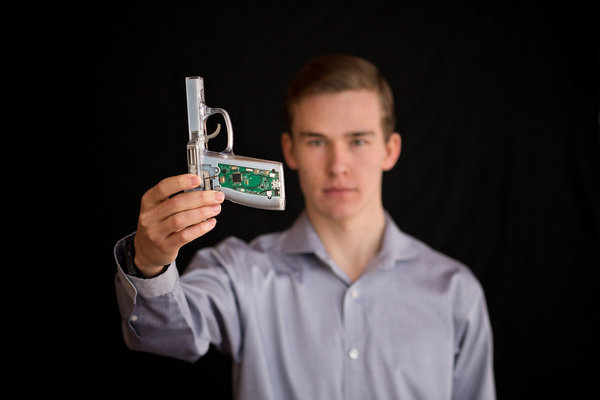 David Hemenway, a public health expert at Harvard, says that the way forward is for police departments or the military to buy smart guns, creating a market and proving they work.

An interfaith group of religious leaders is also appealing to gun industry leaders, ahead of the huge annual trade show in Las Vegas with 65,000 attendees, to drop opposition to smart guns.

Smart guns aren’t a panacea. But when even a 17-year-old kid can come up with a safer gun, why should the gun lobby be so hostile to the option of purchasing one?

Something is amiss when we protect our children from toys that they might swallow, but not from firearms. So Veronica Rutledge is dead, and her son will grow up with the knowledge that he killed her — and we all bear some responsibility when we don’t even try to reduce the carnage.

Error: An access token is required to request this resource.
Type: OAuthException
Code: 104
Please refer to our Error Message Reference.

Sign up for Smart Tech news and innovation updates: